“Last week, we paid a very special visit to Westminster. Deirdre, Colette and I were there to help eight former Passage clients get to grips with their brand new Hudl tablets. The clients, who are all formerly homeless and setting into new tenancies across London, received the tablets as part of our first ever project designed to provide computer technology rather than TVs and radios.

“Passage’s Employment, Training and Welfare Rights Manager, Richard Wealleans, led the new tablet users through the process of setting up and using the Android tablets. He covered everything from creating an email address to finding good free apps and widgets. The attendees had amazingly diverse experience – some new to computers, others already using smartphones, while one young man planned to use complex IT skills to ‘jailbreak’ his tablet as soon as he got home! 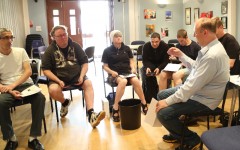 e watched everyone set up their tablets in the Abbey Community Centre space, it was obvious how much they wanted to help each other and wanted to learn.

“Some attendees were working full-time after spending years on the streets. However, some were so nervous about new ventures that they’d had to overcome countless obstacles to make the journey to Westminster and attend the training session. What all these people had in common was that they were at risk of isolation; and were keen to use media technology to fight it. 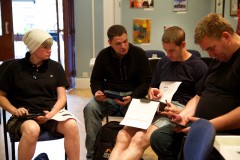 gth will send fifteen other tablets to the Passage in the next few weeks. The beneficiaries will be people who are working to change chaotic lifestyles. They are assisted by befrienders, social clubs and tenancy advisors, in a new initiative which aims for 90% of rehomed clients to remain in their tenancies; a huge increase on the average.

“Media technology is a great way to fight isolation. Tablet users can stay in touch with friends and family, find opportunities for work, socialising and training, and gain confidence in learning new skills. Next up are tablet projects to help cancer outpatients at Addenbrookes, and women starting new lives free from abuse after staying at the Bedford Women’s Aid centre.

“Back in 1939, WaveLength was created in response to the deluge of requests for free radios directed to the BBC by the friends and family of lonely people. Now, we continue to adapt to changes in media technology, to bring these people comfort and companionship in the most effective ways possible.

Tablet computers are the next step in our journey.”