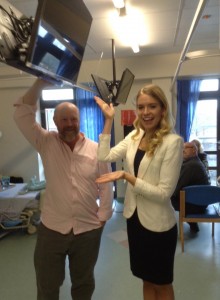 As you might already know, we are fortunate to have Kirsty Heslewood as our celebrity ambassador here at WaveLength. Kirsty was Miss England and Miss UK in 2013 and 2014, and at the moment she is busy preparing for the finals of Miss Universe GB, which is taking place next weekend in Cardiff.

Kirsty is deeply committed to helping overcome loneliness and social isolation. She has met many people across the country who have received technology from WaveLength, and has heard directly from them the many ways in which technology can improve the lives of people who are isolated from their communities.

While we work hard to help reduce loneliness across the UK, we cannot reach isolated people in other countries. That’s why we’re delighted that Kirsty is going to be fundraising this week for a charity called Sheroes’ Hangout. Sheroes’ Hangout works to reduce isolation and teach new skills to women in India who have survived acid attacks.

Each year in India a growing number of young women are attacked with acid in a deliberate attempt to maim or kill. These women are often attacked for a number of reasons but the lasting effects include blindness and scarring as well as psychological, social and economic difficulties. At Sheroes’ Hangout these survivors are taught to use computers, mobile phones and social media to build their confidence and give them the tools they need to connect with others and reintegrate with society.

We are delighted that Kirsty will be raising money for this fabulous charity as part of the final of Miss Universe Great Britain. The competition takes place over 4 days, culminating in the Grand Finale on Saturday 23rd July. Kirsty’s fundraising will take place on Wednesday evening (20th July) as she and the other finalists Cook for a Cause: preparing and serving a 3 course meal for paying guests, who donate as much as they think the meal to be worth.

If you would like to support Kirsty in her bid to become Miss Universe GB and help her raise funds for Sheroes, follow the instructions below to book your place.

We hope that you will also join us in wishing Kirsty the very best of luck next weekend! 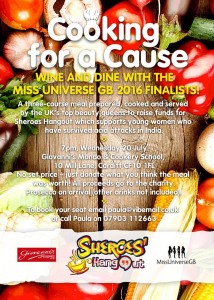