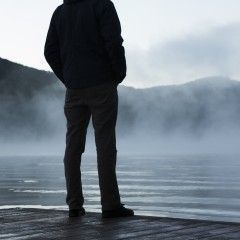 This month we have been focussing on men as part of our Spotlight on Loneliness campaign. We have seen how family breakdown and domestic abuse can lead men into homelessness, and how isolating this can be. In this blog post, we will explore how the Man Box and societal pressure can leave men battling loneliness and isolation.

As part of the Jo Cox Commission on Loneliness, the Royal Voluntary Service this month launched the findings of its study into loneliness in men. They found that 8 million men in the UK feel lonely at least once a week, and that the age at which men struggle most with loneliness is 35. The four main reasons that men of all ages gave for feeling lonely were:

Such a high rate of loneliness among men is startling, but the real cause for concern comes when we consider this: Suicide is the biggest killer of men under the age of 45 in the UK. And of the 6,000+ British lives lost each year to suicide, 75% are male. Put together, these figures show the very real impact of loneliness on young men. One in three men in the UK feel lonely at least once a week, and at the age when this is most pronounced many feel that they have no way out.

One theory as to why men feel lonely – particularly when going through relocation, unemployment, bereavement or break-ups – is the Man Box. The Man Box is the social pressure on boys and men to ‘man up’ or ‘act like a man’. Men are often encouraged to appear tough, self-sufficient and dominant, and to show emotion or ask for help is ‘weak’. Women who are struggling after a bereavement may feel comfortable expressing their sadness or asking for help from friends and family; by contrast, men may be expected to appear in control and emotionally strong, even if they don’t feel that way.

In America, researchers are exploring when in life men start to conform to the Man Box. Some studies have found that while boys up to the age of 15 are comfortable expressing their love for their best friend, they soon start to distance themselves so as not to appear ‘girlie’ or ‘gay’. By the time men are in their 20s and 30s their friendships often rely on doing activities together (like being in the same football team) rather than talking about how they really feel. And these friendships are often sidelined as men try to balance work, relationships and families. As the time to engage in shared activities becomes more scarce, so do the friendships that these activities keep alive. As a result, only 11% of men feel that they have someone to turn to in times of crisis.

What can we do?

To help turn the tide on the epidemic of male loneliness, it is important for men to talk to each other. Social connectedness is vital, and having a good friend to confide in can literally be life or death. For some men this might be a case of strengthening relationships with friends they have now or reconnecting with those that have drifted. For others, it might mean building new friendships all together.

At WaveLength we provide technology to lonely people living in poverty to help them build new friendships or strengthen those that have faded. We believe that there is no substitute for human interaction, but technology can help to facilitate that. We work with men’s aid centres, homeless shelters, social workers and local councils to reach lonely men and women across the country who can benefit from our work. If you would like to help us lift people out of loneliness, please donate today.