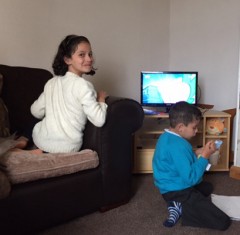 As the wars continue in the Middle East millions of people have been forced to flee their homes, risking and too often losing their lives as they seek refuge in the West. In the face of so much unrest, we are proud to have been able to offer help to an increasing number of refugees settling in the UK through the Syrian Vulnerable Person Resettlement Programme. The VPR Programme is a Government scheme to resettle in the UK some of the most vulnerable refugees who have made their way to camps in Lebanon, Turkey and Pakistan.

With the news full of terrible images of shell-shocked children and desperate parents in refugee camps, it is so touching to see photos of the families we have helped, safe and smiling in their new homes. Some of the children made pictures for us, which you can see here. And one of our favourite pieces of feedback that we received this year came from a local council Refugee Resettlement Advisor, who told us: 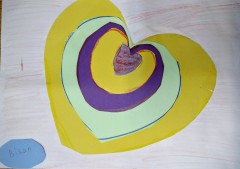 “The families are all delighted with the televisions and radios.  They say that it is a welcome sight and they are excited that they can see what is happening back home as well as gaining an understanding of our European culture.

The televisions have been essential in developing their language skills.  The adults have been watching the news and the younger children have been watching cartoons/children’s programmes – this in turn has led to discussions about what happened in particular episodes with friends in the class/playground.

A particular favourite, and it has been a recurring favourite, across the children is Spongebob Square pants.  I personally have had a number of conversations about what Spongebob has been up to and given my Arabic is poor they have undertaken to provide a dramatic re-enactment, in English, about particular episodes.   The whole team are now keeping track of Spongebob stories on the television so that we can provide appropriate responses and excitement over the storyline.

We also have a number of young parents who have  the radio on constantly.  They have said that they are getting used to the music played on our stations however on the whole they have the stations on the ‘talking’ channels so that they can get used to the 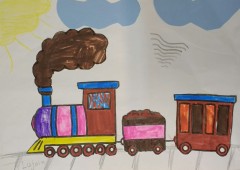 ‘sound’ of the English language’ – which is apparently much easier to learn than Arabic.

The families and Council cannot thank you enough for your continued support.  The televisions and radios provide our families a link to their families back in Syria and in  the camps and it is a constant source of information, knowledge and entertainment for them on a cold, wet summer day in Scotland.”

It is a privilege to play a part in making these families feel a little more comfortable and easing their transition to the UK. We will continue to work with local councils to reach more refugees as they arrive.

If you know of an individual, family or organisation that could benefit from our work, please do get in touch!