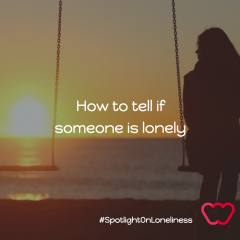 It’s easy to imagine that loneliness is a problem that affects only the very young and the very old. Often our image of a lonely person is a housebound elderly widow sitting alone in her empty house, or the little boy standing on a busy school playground with no friends to play with. However, the statistics tell a very different story. Up to 30% of the population of the UK reports feeling chronically lonely; one in ten people feel that they lack a close friend to confide in, and one in five feel unloved. That means that you almost certainly live, work or socialise with someone who feels lonely.

One of the biggest challenges of experiencing loneliness is admitting it – both to oneself and others – so sometimes it falls to the friends, family and colleagues of a lonely person to recognise the problem and try to help overcome it. But how can you tell if your friend is lonely? Here are some common signs of loneliness to look out for:

1. They spend a lot of time alone

We’ll start with the most obvious one. If you know someone who seems to spend a lot of time alone, it could be a sign that they are lonely. For example, if one of your colleagues always eats lunch alone or doesn’t join in with office banter, it could be because they are nervous about diving in and need someone else to initiate. Of course, not everyone who spends time alone is lonely – some people simply enjoy their own company. But of the 42% of people who feel that they don’t have any friends at work, many of them would like to. An invitation to eat lunch with you might be all they need to get involved.

3. They get stuck on the negatives

Research shows that people who feel more lonely are more likely to be annoyed by the small things and dwell on their bad experiences – perhaps because they don’t have a close friend to laugh it off with. If your colleague is still upset about that rude customer he served last week, it might be a sign that he just needs someone to complain to.

4. They seem to be sick or ill frequently

Tiredness and frequent illness can be signs of a number of things – including overwork or an underlying health issue – so if your friend demonstrates these symptoms the problem isn’t necessarily loneliness. However, people who suffer from loneliness are more likely to experience disturbed sleep and their increased stress levels cause their immune system to struggle in fighting off smaller illnesses like coughs and colds. So if you already have concerns about your friend being lonely, these symptoms could be a symptom to look out for.

5. They seem overly attached to their possessions or hobbies.

When someone feels lonely they are more likely to try to distract themselves with the other things in their lives. So if your colleague is always talking about their stamp collection, or always flying away on exotic solo city breaks rather than spending weekends at home, they might be feeling alone. Loneliness can also lead to increased consumption, so if your friend is spending too much money on unnecessary things they might need more human interaction in their lives.

Not everyone who spends time alone is lonely. However, if you are worried that a friend or colleague seems a bit down or is withdrawing into themselves, a combination of the above behaviours may well indicate that they could benefit from some extra effort on your part. Inviting them to join you for lunch once in a while, or introducing them to a friend you think they might get on well with, might be the first step to helping them feel a little less lonely. We have also created a handy page of resources to help people who might be lonely. Visit our ‘Helpful Services’ for more.

For 80 years, the charity WaveLength has led the way with delivering change for lonely and isolated people. We help fight loneliness by giving people living in poverty televisions, radios, and tablets. The people we support are lonely because of age, illness or disability, or by circumstances which make it hard for them to leave the house or meet new people.

If you, or someone you know, could benefit from a radio, television, or tablet, take a look at the ‘Apply for Help’ section of our website.

9 thoughts on “How to tell if someone is lonely”