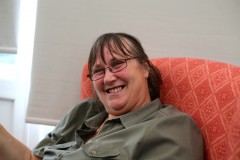 Many WaveLength beneficiaries are homeless or in insecure housing. These people have very complex needs, as homelessness is usually a stopping point on a very difficult journey. We hope that the TVs, radios and tablets we supply will make the next stop a much happier one.

Recently, we donated a TV and radio to a lady of 82 in a women’s aid centre in Southend. Tragically, her husband’s violence had forced her from her home – a stark reminder that abuse can affect anyone, at any time of life.

Mrs Price, who is visually impaired, said, ‘What a wonderful surprise. I thought it would take me ages to save for a new TV.’ Other residents helped her to tune her new radio, and she began to form friendships with them.

At the other end of the WaveLength beneficiary age range, 18-year-old Sarah received a TV to support her move out of temporary volunteer-driven housing with SASH, into her own Yorkshire flat. Sarah said, ‘It’s very thoughtful that people are willing to help by giving a TV. It’s generous & a good idea. Sometimes I feel lonely and having something to watch, rather than just look at four walls, helps to relax and feel comfortable. It has helped me settle in.’

The story which horrified the office is Mike’s, which shows how senselessly destructive homelessness can be. Brought into hospital following a suicide attempt, Mike had severe frostbite from sleeping in Blackpool’s park. The front parts of both his feet were removed. Already depressed and homeless, Mike was now physically disabled as well.

Luckily, Gorton Street Hostel was on hand to help, and applied for a TV from WaveLength. Staff say, ‘Mike did not know anybody in the local area and was unable to leave the building due to his poor mobility. He has stated many times how much the TV meant to him and how it has helped him to deal with the isolation and loneliness that he feels. He is now managing much better and the TV has been a real source of comfort to him while he is spending so much time in the accommodation.’

Tim says, “It makes me incredibly proud to know that WaveLength is helping such a diverse group of people. Homelessness is a terrible thing – and we’re being told, again and again, that media technology is a huge part of creating a secure, comforting home to recover in.”

Touched by these beneficiaries’ stories? Help us help more