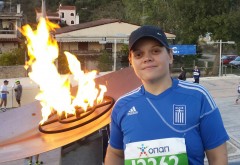 Six months ago we received an email from Amy Trakos, who found our website online and was inspired to get in touch. Amy was planning to run the Athens Marathon in November and asked if she could do so on our behalf. Of course there is only really one answer to that question, so in November – after smashing her fundraising target – Amy put on her running shoes and headed to Greece.

Here is her story in her own words:

Choosing to run the Athens marathon was not a hard decision for me as I am half Greek and have always wanted to run the original and authentic course which Pheidippides, arguably the most famous messenger of all time, ran, in order to tell the Athenians of their victory over the Persians in 490BC. However, I was also hoping that, unlike Pheidippides I wouldn’t collapse and die at the finish line. This was one of the reasons why I chose to run the demanding course for a charity, so that I would have that voice in my ear telling me not only that I shouldn’t give up, but that I simply couldn’t. Whilst always in awe of all charities, it is the smaller ones, which always appear to be structured like a family which bring support and help to others which is far beyond the size of the charity itself which truly stay in my mind. WaveLength not only stayed in my mind but in my heart also. Receiving emails and messages from Sarah and the team right up until the day before the event made me feel like I had the whole Wavelength team with me from the outset and when I took off at the start line it was WaveLength I was thinking about.

Another key reason why this charity became to mean so much to me was that from the very first time I looked at their website I saw genuine and heartfelt videos of some elderly individuals who spoke about what a lifeline the charity had been to them and how it had provided a window to the outside world. This made me think instantly of my late grandmother Rita, who had always said that you should always take your time to stop and speak to elderly people when you see them on the street, as it may be the only person they speak to all day. I knew straight away that she would be so happy that I had come into contact with this amazing group of people.

The extent to which WaveLength helps people from so many different backgrounds and bases the help it provides on individual needs and circumstances is something which stuck with me and I took extreme pride in raising money for them and always enjoyed explaining to people what the charity was all about and how they helped. The reception this received from people was one of great happiness that they could help but also, like myself, that it is a charity which deserves to receive more attention that it currently does. 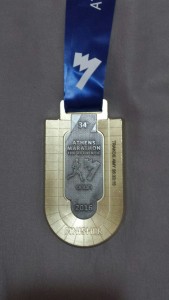 And so to the Marathon itself, a bizarrely warm November day of 26 degrees in Athens. The course was indeed challenging, with very steep and long hills and a warm temperature which felt as if the Greek Gods themselves had conjured up especially for the day. The thousands of wonderful cheering spectators felt a world away from the crisis and hardships Greece, and particularly Athens at its core, continues to suffer with. From standing next to the Olympic Flame itself at the start line in the town of Marathon, being passed olive branches along the route by the very young and the very old and finally running into the Panathenaic stadium to a sound which could not have been dissimilar to the same level of noise when the stadium hosted the first ever modern Olympic Games back in 1896.

And fortunately, I didn’t die at the finish line, which means that the next time I begin a challenge which could involve further fundraising, I will not need to think twice and it will again be for the truly wonderful and inspirational WaveLength.

We at WaveLength are very proud and honoured that Amy chose to take on such a difficult challenge on our behalf. Thank you Amy for all of your hard work!

If Amy has inspired you to take on a charity challenge and raise money for WaveLength, please do get in touch – we would love to hear from you.